“Home Safe” – Memorial to all the RAF personnel who served at RAF North Creake, Norfolk during the Second World War 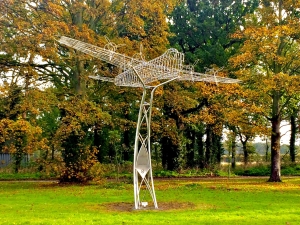 Project: “Home Safe” – Memorial to all the RAF personnel who served at RAF North Creake, Norfolk during the Second World War, and the 73 men lost in action whilst on active service from the base.

The sculpture is of an RAF Short Stirling Bomber. It has a 6.5 metre (22 feet) wingspan and is 5.5 metre (17 feet) long. The impressive aircraft sits on a 3 metre tall plinth.

The Stirling and plinth are made from 316/L stainless steel round bars and hollow sections. The location is about 3km from the sea so the corrosion resistance of 316 stainless steel was important to this project.

It was designed and created by Derbyshire based artist Andy Knight, and has recently been put on display following a delay to the programme due to the Covid-19 crisis.

The memorial is the vision of Claire Nugent and Nigel Mortar who own the old Control Tower on the site of RAF North Creake at Egmere , which they now run as a bed and breakfast . They are committed to building a memorial to all who served at the now disbanded RAF North Creake . The sculpture is the centre piece of the memorial , a roll of honour with the names of the 73 men lost in action will also feature .

The memorial is just at the side of the B1105 ,next to the junction to Edgar road.