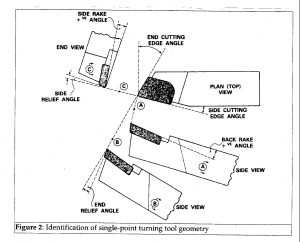 End and side relief angles must be ground flat, without any concavity. Concave faces reduce the support at the cutting edge and can result in chipping or breaking. 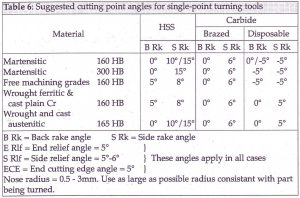 The surface speeds shown for the different tool types are at the set depths of cut and feed shown. If depth of cut and feed are increased, the speed must be reduced. Alternatively for increased speeds, reduce the depth of cut and feed. For austenitic steels, (e.g. 304, 1.4301), the depth of cut must however always undercut the induced work hardened layer, so increase in speed must be carefully limited. Similarly, it is important to leave enough steel on the surface when completing the last roughing cut to enable sufficient finishing cut depth. Where this is impractical, a carbide tool used at high speed, low feed and a shallow depth of cut is an option. 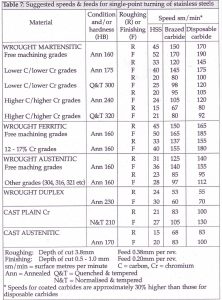 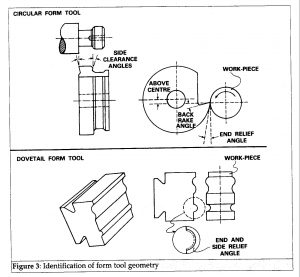 Form turning stainless steel should allow sufficient material to be removed to avoid surface work hardening problems. This applies to both primary and secondary cuts in multi-cut operations. Feed must be maintained as the tool enters the work-piece.
For form tool turning deep or complex shapes, slower speeds should be considered.
The flow of cutting fluid, (coolant), must be carefully controlled to ensure that a consistent, large flow volume is delivered to the cutting edges at all times during form tool turning of stainless steel. 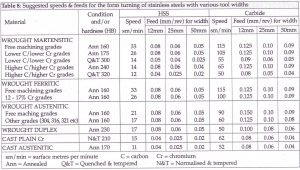 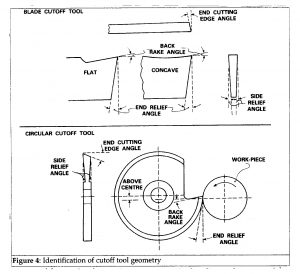 Either blade or circular tools can be used.
Circular tools are more rigid and provide a better heat sink capacity than blade cutters and so are generally preferred for parting-off stainless steel, where sufficient cut depth is allowed by the tool geometry.
Circular tools are also better for interrupted cuts as the tool passes through details like drilled holes.
Back rake angles should be between 6 and 10 degrees.

Circular tools require an end cutting edge angle relief, usually between 10 and 15 degrees. The angle should be reduced as the depth of cut increases on larger diameter work-pieces to around 5 degrees, to avoid tool deflection. These smaller angles can result in some burr being left which may have to be trimmed off with a second cut.
‘Above centre’ distances should about 3mm. 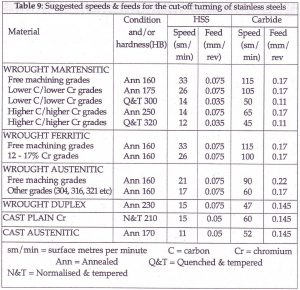